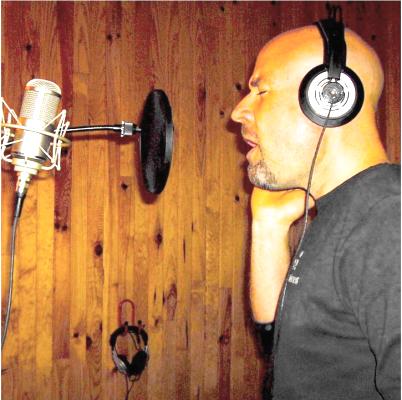 From a passionate encounter with Esperanto in 1997, Kris Spitzer, a Frenchman born in the Loire Valley, created Kore (cordially).
He spent several years studying and singing the language with an initial group of musicians, which gave birth to a first album, Kia viv' (what a life) edited by the French production label from Toulouse, Vinilkosmo in 2000.
The group played for festivals in Toulouse, Strasbourg, and Angoulême in France.
Kris persued his way alone, writing and perfecting his style, before being joined by the guitarist François "Fiks" Tijou, and his friend David Hadjadj, a multi-instrumentalist and musical arranger from Paris. From this new collaboration a dozen titles were created in 2007, which makes Kore today an expression of three musicians in the studio, and six musicians on stage with varied musical styles.

The neutral language, with latino-slav resonances, personnalized by the often biographical lyrics, gives the group a true identity. Following the example of mythical groups, Kore shines by a linguistic, musical, and vocal originality which is otherwise totally missing from the music scene today.
It's a shame that their music is not more widely known, because Kore would very much like to share their variety of pop music with a wider public, including the millions of esperantospeakers. This new album, Tielas vivo (so goes life), has been produced and edited by Vinikosmo in 2007.

In order to display our banner linking to this page, just copy and glue the following HTLM embed code onto your site or blog :